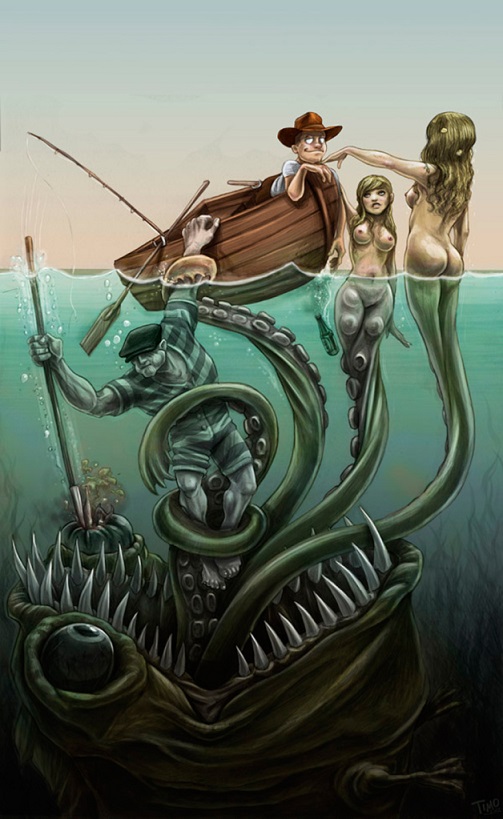 I always enjoyed fishing right before the sun came up, a tradition started years ago with my father. He’s been gone for two decades, but I still carry his old spear with me, despite having moved on to fishing rods. Something about the presence of that steel harpoon comforts me.

When I first saw her, I thought she was a fragment of my sleep deprived imagination. The sun had just started its ascent when the waters stilled. It was then she broke the surface, slow and silent. Large blue eyes stared at me with curious assessment and I blinked, unsure if what I was seeing was real. Before I could get a closer look she’d dipped back beneath the surface, vanishing from sight.

A week passed before she appeared again. By that time, I’d convinced myself she’d been some sort of dream. However, when the waters stilled, my heart raced. As she emerged, the sunlight cast a halo around her naked upper body. Droplets of water clung to her breasts, their glistening hardened peaks drawing my attention.

Her voice was gentle and melodic, reminding me of a lullaby my mother used to sing when I was an infant. So lost in the enticing sound of her cadence, I could only nod in reply.

“My sister and I love sailors.”

She reached out a slender hand to tap at the water. The motion caused her generous bosoms to bounce and sent ripples across the stilled surface. Then there were two of them. The same sapphire eyes, same full lips, and same seductive voice.

For weeks I rowed before dawn to meet them. The sisters would swim around my boat as we talked, laugh at my jokes and smile at me. They called me ‘Sailor’ – a simple word, but spoken for their lips it became so much more. Before bidding me farewell on the morning of our twenty-ninth encounter, they asked if the next day I’d join them in the water.

Perhaps it was the excitement and anticipation that sent me bragging.

My fellow pub patrons sniggered, dismissing my tale with scoffs and grunts. The fools. I’d show them it was the truth, make them regret their mockery and ridicule.

What I needed was a witness, and Emerson James was the perfect choice. Too dumb to collaborate a lie, he’d be my proof. His worlds would validate the sisters existence, and I’d be showered with prestige and acclaim.

Together we rowed out to wait for the sisters. The waters ceased their moment, signaling their arrival.

“Sailor, you brought a friend?”

When I told them he too was a sailor pleasure spread across their beauteous face as they exchanged greetings with him. Wasting no time, I stripped down to my undergarments as the sisters watched, their gaze expectant.

I hesitated. What was it about the way they stared at me which caused the hairs on the back of my neck to rise in warning.

Before I could process my uncertainty one of the sisters had tilted the boat towards herself. The action surprised me, for I didn’t know she had the strength.

“Swim with me, Sailor.” She whispered.

And then her mouth found mine.

Her lips were firm and freezing, but that was soon forgotten as our kiss deepened. The world faded away and I became engulfed in the passion and promise her lips held. Fingers brushed down my cheek in gentle caress, their touch eliciting a moan. I reached for her, wanting to pull her closer, but before I could something wrapped itself around my wrist.

The kiss was broken as I turned to look at the tentacle gripping me. Thick and muscular, it constricted and began to pull. Like others from our town I’d grown up on the stories of sea monsters; heard tales of legendary beasts immense in size and strength.

A rush of panic spiked my heart-rate as I reached for my father’s spear. My voice called out a warning to the sister, but when our eyes met I saw the truth in her gaze.

She was the creature.

My body was yanked forward in a motion so swift I barely had time to hold my breath. With one hand I gripped at the side of the boat, and for the first time, I saw what they really were.

A body of a large fish three times the size of my boat and bulbous eyes with a ring of blue the same oceanic shade as theirs. Its mouth was lined with razor sharp teeth, and sprouted four tentacles. One held my waist, the other my wrist, and the last two belonged to the sisters; the appendages transitioned from an elongated monstrosity to the delicate curves of a woman’s body.

My lungs strained in protest, longing for that next breath of air I knew would never come. The creature’s grip was firm and cold – a cruel reminder of her lips. I spared a thought for poor Emerson James, whose fate I’d also sealed. With my remaining strength I trust my father’s spear into its sinister bulging eye, bursting it. The last bit of oxygen left my lungs as my fingers slipped from the life line of my boat.

A final tug pulled me into the abyss of the creature’s fangorious mouth.

Error: Twitter did not respond. Please wait a few minutes and refresh this page.

This blog claims no credit for any images posted on this site unless otherwise noted. Images on this blog are copyright to their respectful owners. If there is an image appearing on this blog that belongs to you and you do not wish for it appear on this site, please contact me, with a link to said image and it will be promptly removed.
Loading Comments...
%d bloggers like this: